Hello everybody! Two weeks until the start of open publication working group. To accelerate the actual work of the group, and to help fold in those members who are not going to be able to be here for meeting one, I’d like us to take the next week to post a short introduction to ourselves.

Briefly, if you could give a little background of who you are, what your interests are in Open Access, and what you hope to accomplish in this group. Also, post a picture so we know who each other are before we start. I’ll start.

So, I’m Jarrett Byrnes. I’m currently a postdoctoral fellow at the National Center for Ecological Analysis and Synthesis, although I’ll be starting faculty at UMass Boston this fall. 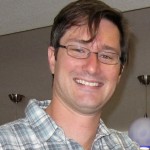 While I’m an Ecologist by trade, I’ve long been interested in how the internet and technology can help us accelerate the pace of the scientific conversation and collaboration. I’ve been blogging about my research and since about 2003 and use Twitter actively primarily as a means to communicate with my peers. Last year, I co-founded the #SciFund Challenge, an experiment in science crowdfunding to spur outreach and engagement by scientists with the broader world around them.

I’m interested in Open Access because, frankly, it just makes sense as the next evolutionary step for scientific discourse. All of this closed manuscripts, closed data, papers hidden behind paywalls – it simply makes no logical sense to me if our goal is to have science be as fast and furious as possible. Science does not benefit from restrictions in access to the fruits of ones’ colleagues’ labor. We have the technology to change this. And I think it is high time we do so.

So what do I want to get out of this group? Frankly, I’m hoping that we can come together in the room, consider the major issues of how work goes from being raw data to being birthed as a piece of the scientific discourse, and figure out just how that should happen given the technology and social milieu that is available to us. I’ve mused on this before. Frankly, I’d like to walk away at the end of the week with a blueprint in hand, and plans on the table as to how to create this next generation of Open scholarly publishing. I realize this is ambitious, but, I think we can do it.